I’ve taken a lot of photos at work that I’m inordinately proud of but I’ve taken very few of my own garden that I like at all.  The only reason I’ve saved any of them is to, optimistically, use as “before”s.  There’s always some flaw in a wide angle shot that makes me cringe – things that can be overlooked except through a lens – a giant invasive weed, a plant in the wrong place, an expanse of lawn.  But during the snow storm on New Year’s eve, I took some pictures of Zeke and Nino cavorting in a corner of the garden, and not only do I love the pictures for the subject (pure joy), but I think they’re the best pictures I’ve ever taken of the garden itself.  (I admit to adjusting the exposure and levels slightly – ok, a lot.) 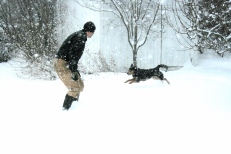 I like that the bright whiteness of the shed doesn’t make it stick out like a thumb.  I like that the caryopteris is a graceful sculpture that doesn’t appear to be sitting on top of the lavenders or anything else in that bed.  There’s a hint that I like of permanence, structure and summer shade in the tree branches.  And I love that the lumpy, thistleful crab-grass lawn doesn’t exist at all.

My hope is – and I guess it’s a bit of a new year’s resolution (I had previously resolved to not be resolute) – that I will take another picture of that corner of the garden – or any other corner for that matter – that I like as well when it’s not obliterated by snow.  I’m saying it out loud and that means I’ve got to get busy.  To turn the garden from a cringe inducing embarrassment into something I’m proud to photograph will take paint (before the dogwood and lilac bloom and leaf out), planting – a lot of planting, editing and time.  But the snow has shown me the potential for proud and I resolve to do it.

Have you made any new year’s resolutions – inadvertantly or otherwise?

7 thoughts on “A small hope for the new year”