I don’t make New Year’s resolutions anymore but one of my secret resolutions this year was to feed and learn the neighborhood birds.  I know the backyard regulars – robins, cardinals, bluejays, starlings, hawk – well enough to say hi to when we pass on the street but there are so many others that I don’t know from Adam.  A few years ago I bought the Peterson Field Guide to Eastern Birds like everyone else and it lived in my car for years just in case I had a bird identification emergency out on the road.  Now it’s on a shelf somewhere and I haven’t even browsed the pictures lately.  My biggest trouble with bird i.d. though is when the bird isn’t visible at all because the book is no help to me then.  When they say a certain bird makes a call that sounds like “potato chip” and to me it sounds for all the world like it’s saying “blue corn tortilla chip”, I just get confused. But if I commit to actively feeding the birds (as opposed to letting them sup on rosehips, bittersweet and holly berries until those are gone or filling the feeders once and forgetting), maybe I’ll get a glimpse at some of the long distance callers when they come hang out at my feeders.  And with a positive Peterson i.d. I’ll stop calling them Edgar and Lucille. 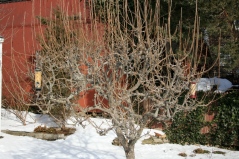 So today I dutifully scrubbed the greengunk off the perches and even dismantled the parts to get at the hard to reach ghick inside and I filled them from the second biggest bag of seed available at Agway.  I joined The Birdseed Club.  I’ve made a commitment.  (I wonder if I’ll have to attend potluck meetings?)  I am resolved to feed the birds from now on – if they ever show up.  And until then evidently, I’ll just feed the squirrels. 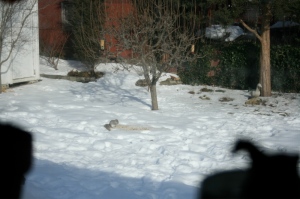 5 thoughts on “The Birdseed Club”