The longer I go between blah-blahs the less I desire I have to post. It’s like making a phone call. Pretty soon I’ve just got to dial it or else the guilt eats me alive – and the resulting conversation is always a great thing. I don’t have any-much guilt in this case just an overwhelming sense that there’s too much to catch up on – and the longer it goes the more overwhelmed I feel and so I keep opting for another chapter and nap on the couch instead. But not really that much has changed – without further ado, here’s a nutshell synopsis of the last few weeks:

The dog still has very soft ears and has gotten over some explosive poop problems and is called “well balanced” and “so cute” by strangers on the street. The cats are practiced at their favorite sport – knocking-things-off. Tee time is 4:30AM. Z is still a saint who cooks lovely things, helps me dig holes and who spent weeks repairing a boat so that we could sail away any old time.

And in the garden: I’m filling it in. The deck is bedecked with houseplants (but the house is still decorated in dirty empty saucers). Last year’s Swiss chard has put up flower buds. The plume poppies along the path are still demure and the mint is still a perfect steppable. I’m in love with woolly thyme. I’m cultivating an ox-eye daisy farm apparently and have picked enough lettuce leaves the last couple of weeks for 2 salads for 2 people every day and I can’t keep up. The nine-bark I moved stopped sulking and bloomed its brains out. The clematis ‘Roguchi’ on the fence popped open this week and was leaning dangerously until we bought a handsome wrought iron crutch for it. I’m disappointed in the clash of my white rugosa rose anywhere near the filipendula but I have no idea which to move and where. I have begun to set in roof slates (acquired from work) around the beds and have only broken several. The 30 lb. Scotts silent push mower needs sharpening and makes me feel somewhat homicidal. (I’d kill for my neighbor’s horrid gas mower) but I’ve spent at least as much time every weekend taking out grass as I’ve spent mowing it.

The only thing I really regret about my absence from this portion of the blogosphere not keeping up with you all. I’ll be making the rounds again and meanwhile for your viewing pleasure, here are a few pictures not of my garden but one mine aspires to emulate – it’s completely lawnless! (and 30 years in the making.) 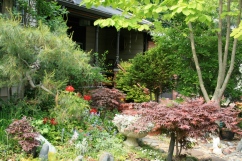 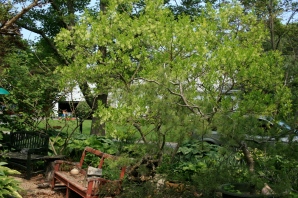 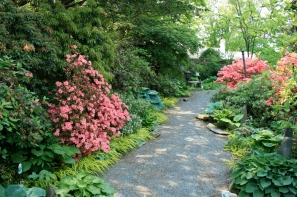 2 thoughts on “Filling the void”