I have heard of gardeners who compost in place – who chop up debris as they go and leave it in the garden beds rather than carting it all off to cook in the compost pile – but I’ve never tried it. Until today. I was desperate to get outside (more on that when my next column is published) and tidy winter’s mess out of the garden, but since I haven’t yet eradicated the bittersweet from my compost area (refresh your memory about my compost-fail here) it was either bag up crashed winter stems and twigs to take them to the dump or leave it where it lies in the garden. 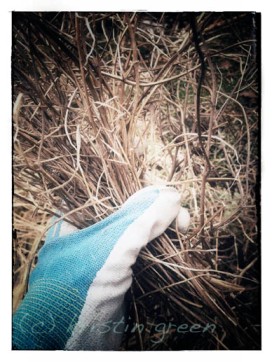 I am lazy by nature (don’t tell them at work), and thrifty, so the extra effort to shove everything into those stupid brown bags and trash perfectly good compostables didn’t appeal. So I tried the other. I thought that chopping everything up would be tedious but the old stems are so brittle I barely even unholstered my Felcos (they need sharpening and were fairly useless anyhow) and crushed most everything into bits with my new-gloved paws. It was so brilliantly easy (read, lazy) that I honestly can’t believe I’ve never used this method before.

My garden is maybe not quite as tidy-looking as it could be, with bare exposed soil around every still-dormant plant clump, but I don’t like the look of exposed soil anyway — even in spring. Mostly because I know that any vacancy will fill with chickweed by tomorrow. And the garden certainly doesn’t look any worse than it did when the stems were leaning and crashed. Actually, I think it looks a damn-sight better. And I’m willing to imagine that covering the soil with stuff now will cut down (slightly) on weed germination. Not to mention that any seeds I scatter from annual and perennial reseeders will stay put and not drop along the path to the compost. Come to think of it, I might miss the volunteers that pop up in those random places… As for the weeds I pulled, it will be interesting to see if they reroot where I left them. (At least none, not even the chickweed, were in flower yet.)

Do you ever compost “in place”? Why or why not?

1 thought on “Mulch: no waiting”