Ever since my daily schedule became …unstructured… I have been unstuck in time. Or rather, stuck on a date in August as if this has been one long week of staycation. No complaints because staycations are always blissfully productive but it’s a little strange given that August became September and the other day I had to flip the calendar page to October. It’s also strange to feel so confused given how much time I still spend outside with my eyes and feelers on every changing thing.

I have been doing fall things in the garden (taking cuttings, saving seeds, making room in the plantry), which must mean I’m not completely in denial, but I’m more inclined to credit my walks with Bazil for beginning to reset my internal calendar. Every morning is a little darker; every afternoon a little more apple-crisp.

We take most of our walks around town but Mt. Hope Farm has become our favorite place to find the season (and chase squirrels). We go there a couple times a week, sometimes meeting up with another human, sometimes not.

It’s a special place, mostly wild and wooded, and history rich. Mt. Hope was the seat of the Wampanoag sachem Metacomet (also known as King Philip), and the site of his assassination during King Philip’s War. The land was home, at least briefly according to one of my walking companions (not Bazil), to a Native American-themed waterfront amusement park. Now it’s a working farm (again), B&B, special-event venue, host to a year-round farmers market, and has miles of road and trails open every day to the public and their dogs, free of charge. 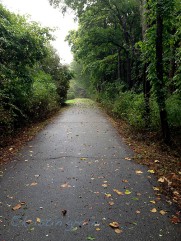 Fall’s down the road 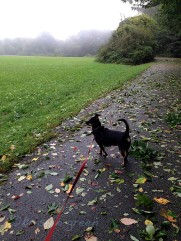 Bazil on the lookout at the meadow’s edge

One of Mt. Hope’s living dead

A view of the pond through a lichen-laden (crabapple?) tree

On the last day of September, right after the first rainstorm in too long, Bazil and I found October.

Where do you go to find the season?