(Originally published February 10, 2016 in EastBayRI newspapers right after two snowstorms and before the negative digit descent into this abysmally cold weekend. I wrote it a week prior to all that, back when I had much higher hopes for winter.)

Is it possible this February won’t be like last February? Will we not have to spend weekend after weekend shoveling out, bundled up in wooly layers against polar vortices, rattled by bone deep shivers? Will we actually be able to go outside now and again without a puffy coat, smell the earth, and do some gardening? Last year’s thaw-less February and March nearly ruined my opinion of winter, so I can’t help hoping the weather stays this side of arctic. I might get my wish. Even if snow returns (a few inches are forecast as I write), it does seem as if the pendulum has swung to the mild side. (Knock wood, of course.) Punxsutawney Phil predicted an early spring and I took advantage of a preview.

My neighbors, whose gardening practices are generally more traditional, probably think I’m lazy for not putting the garden “to bed” in the fall. I’m the first to admit a preference for reading a good book on the couch with a dog on my feet over any kind of physical exertion, but that’s not my only reason for leaving stems and seedheads standing. I let the garden go because plants like nicotiana, tansy, borage, marigolds, dusty miller, and some salvias look decent and produce flowers right up until they’ve been buried in snow or zapped by a deep freeze. I also like to provide cover for insects and other wildlife. Some gardeners might balk at harboring “the enemy” but beneficial insects overwinter in hollow stems too. Bumblebees’ survival, and some butterflies’ too, depends upon the protection of leaf debris; and birds will hang out in a thicket and pick seedheads clean. And now that I’m itching to get moving, tidying gives me the excuse to go outside and the activity keeps me warm.

False indigo (Baptisia australis) was the first plant to land on the compost heap a few weeks ago. It saved me the trouble of snipping every stem by detaching as a unit from the crown, probably during a decent wind, and coming to rest in a tumbleweed tangle against my garden gate. Why the praying mantis always chooses to deposit her eggs on that plant is beyond me. Unless she knows I’ll tuck her babies’ branch back into the garden somewhere. 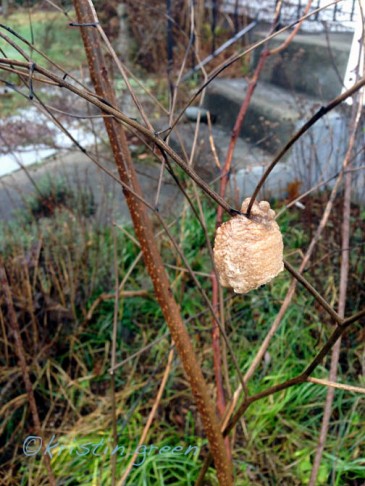 Praying mantis egg case tucked back into the garden

Nicotiana stalks were next. Their hideousness in death is in direct proportion to their beauty in life. I pulled most out but cut others back to nubs in case they re-sprout from the root. – Winter has been mild enough they just might. The garden looks better already.

Usually sometime in January the pretty wind-whipped waves of Japanese forest grass (Hakonechloa macra ‘Aureola’) and the seedy tufts of love grass (Eragrostis spectabilis) begin to self-destruct and blow all over. That stuff wanted collecting and I snipped and snapped the remaining stems to reveal emerging foliage belonging to a few bulbs I planted nearby last fall or the one before. My clumps of catmint (Nepeta ×faassenii) had become flattened mats of brittle stems, gratifying to break into bits with my fingers. I scattered the debris back around the crowns to insulate new growth already sprouted. That probably doesn’t sound like an improvement in looks but, trust me, is.

If you have any dormant pruning to do – remedial shaping of trees and shrubs, removal of damaged branches, deadwood, and fruit trees’ water sprouts – now’s the time. But save spring bloomers until after their display, and wait for hydrangeas’ buds to show signs of life before whacking them back. Hold off pruning your roses and butterfly bushes until the forsythia blooms.

Might not be long now. Maple buds are fattening. Skunk cabbage has been blooming since December. Daffodil foliage is up; snowdrops are out, and crocus are on their way. I asked a gardener with a better memory than mine if spring was early the last time El Niño was at the controls. She thought it was. It’s too soon for winter to be over but hope might spring during the thaws.

Are you taking advantage of the thaws? Does it feel like spring’s around the corner or still weeks away from your garden?