(Originally published in EastBayRI newspapers sometime in March. I have been remiss in reposting! But because it is currently snowing outside, I thought I might as well make up for misplaced intentions. What’s written below isn’t old news — although I really-really-really wish it was.)

I spent the entire Sunday of the time change outdoors soaking up the sun, holding sweet and earthy scents in my nose, listening to birds compete for attention, and gardening as if it’s spring. The very next day it sleeted. Dark gray days of rain followed, then sun again. As I write this, there’s snow forecast for the equinox. March, poor thing, suffers from wild mood swings.

I know that about March (and can relate) but I started cutting my garden back anyway weeks ago at the first hint of April. Suddenly I couldn’t stand to look at its tatters for one more minute. I hauled armloads of fallen stems and seedheads that no longer held any winter interest to the compost pile. When that back and forthing became too tedious, I broke the rest of the debris into bits and spread it as mulch around my perennials’ sprouting crowns. Tidiness, like beauty, is in the eye of the beholder. (My mess is creative clutter.)

In the last couple weeks those perennials have put on another bit of growth while spring marched on. Redwing blackbirds came back at the beginning of the month (if not before); I heard choruses of spring peepers sound in my neighborhood on the evening of the10th. On the 12th I noticed black-crowned night herons and a pair of Canada geese had returned to the tiny Tanyard Brook reservoir on State Street in Bristol (my favorite place to bird and turtle watch through the chainlink). Crocuses vied with snowdrops on social media for most-liked, #spring. Pussy willows broke out of bud and the earliest daffodils began blaring tiny trumpets. 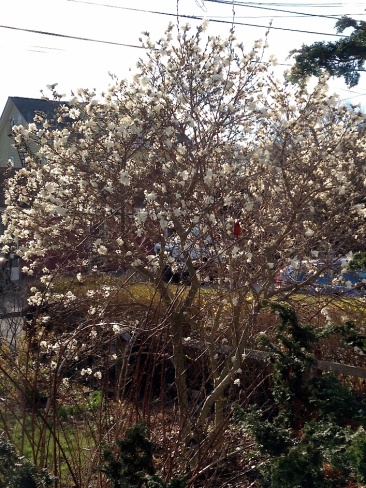 Cardinal in my just-blooming Magnolia stellata a couple of days ago. 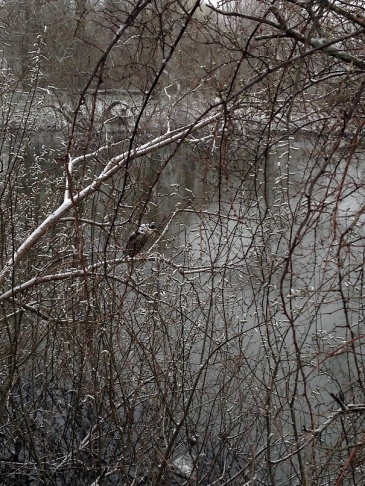 Black-crowned night heron hunkered in the snow this morning.

I’m a little nervous about jumping the gardening gun but my inclination, despite sleet, frosty nights, and humbugging snow is to trust the signs and follow their cues. So now I’m waiting, sort of impatiently if my inability to wait patiently is anything to go by, for the forsythia to bloom. Its yellow arches and mounds are the universal signal that the ground has warmed another notch, and it’s time to commence the next to-do on my list: rose pruning. But rose buds have already swelled and the other day I couldn’t keep my pruners pocketed. You try.

Most* of the roses we grow around here are so hardy and unperturbed by March’s moods that they won’t be overly injured by premature pruning. *I did once almost kill a marginally hardy rose by accidentally pruning it before a very hard and prolonged April freeze. Mea culpa. But if the rose I pruned last week suffers any dieback I’ll just prune it again shorter this time and be happy I did. Which says something because I’m in the habit of lopping my roses to within inches (12-to-18”) of the ground. There are invisible dormant buds up and down rose canes, even all along the old gnarly trunks, which respond to severe pruning (and a topdressing of compost) with gratifying vigor. It’s actually very hard to kill a rose. Even for me.

Along with roses, it will be high time to prune butterfly bush (Buddleia davidii and cvs.), bush clover (Lespedeza spp.), blue beard (Caryopteris ×clandonensis), and Russian sage (Perovskia atriplicifolia) to their lowest buds (anywhere from about 2 to 12” from the ground). Might as well shear the lavender then too but not nearly as hard—cutting back into the woody bits generally only gains you ugly stumps.

In the meantime, while the weather goes through its moody March madness, holding our horses gives us gardeners a good chance to reassess, dream, and plan. As perennials begin to flush out from dormancy so do the memories of the best intentions I formed last year and over the winter. I could—and should—stay busy making endless lists of all of the changes I want to make. And, after the pruning is done, the daffodils peak, the tulips begin to bloom, and the ground dries out a bit, all signs will point to digging in. By then spring won’t be denied and neither will we.

She says. But here it is, April 4 and there’s a good 4 or 5 inches of snow on the ground and counting. Last week or the week before it was in the balmy 60s. (Even my mood swings aren’t this violent.) Daffodils — in peak! –have faceplated; muscari and chionodoxa are buried; forsythia is trying to look tough; my magnolia is toast. Big sigh. Spring marches on? Remains to be seen here. How about in your garden?