It’s hard to believe I haven’t already waxed on about Boltonia asteroides ‘Nally’s Lime Dots’ (or is it ‘Dot’ singular?) but a quick search of this blog found only two measly mentions. (I found several on Bwold’s blog along with a myriad of my own photos in google images, some totally unrelated. Weird.) Anyhoo, I love this plant and it loves me. By which I mean, it loves my garden.

I love it for its chartreuse petal-less polka-dots. I enjoy the way those buttons catch the long late-summer light in halos (it’s not fall yet) and how it’s the only thing, so far, in my garden that refuses to be overwhelmed by Lespedeza thunbergii ‘Gibraltar’. In fact, they’re a pretty pair, thick as thieves. And I’m gratified by its generosity. No matter how much I edit out, it rebounds to grace the neediest spaces. And as Kathy from Avant Gardens says, “it should be a nominee for best supporting actor…whether in the garden or in a vase”. I’m never inclined to bring flowers inside until old Nally’s dots bloom. 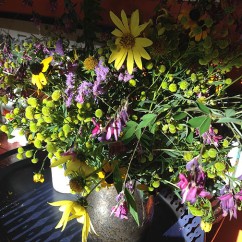 The only thing I don’t love is that the flowers are unattractive. I’ve never seen a bee, wasp, moth, or butterfly visit the buttons. There’s nothing for the hummingbirds there. Too bad it’s so boring! If not for its evident sterility, it might be a contender for my favorite plant ever.

FINE PRINT: perennial, zones 5-8. Full sun to maybe partial shade; average to crappy soil, and drought resistant. Grows 4-to 6-feet and leans like a drunk. May be given the Chelsea chop to encourage sturdiness but, in my experience, still becomes tall and tipsy.

What’s catching the long light in your garden? Anything vase-worthy?