I can hardly believe it’s a new year already. It feels like mere days rather than twelve months since I waxed rhapsodic about visiting greenhouses and using candlelight to cozy winter’s dark nights. And I remember bemoaning the lateness of spring as if summer never happened. Time seems to stretch in winter like a rubber band cocked at spring. And then doesn’t it go flying? Come spring we can hardly help but be in a mad rush to enjoy every last second. Right up until the band hits the wall of the holidays with a resounding thwack and flops to the floor.

Which is why writing notes about the garden and taking a few pictures through the season is as necessary as planting and weeding. Taking the time to mark the best—and worst—moments puts the stretch in the elastic of time. And looking back at those records now helps me recall that not only did summer happen, it was long and glorious (so was fall), and has plenty to teach about the coming year. 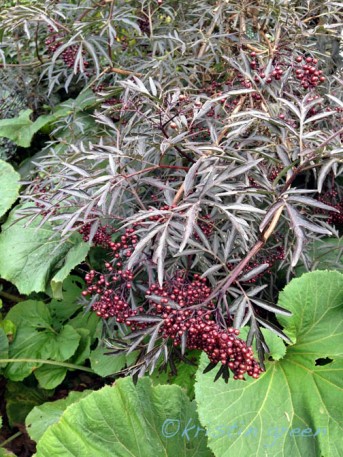 For instance, reading my notes from May, I am reminded that just because something looks dead doesn’t always mean it is. The roses I thought were goners after cutting them back before April’s deep freeze (winter truly was interminable last year) bloomed into November. I also expected to lose what was left of my Black Lace elderberry but evidently its disgusting infestation of borers went to the dump along with the deadest branches. The remaining trunk might be oddly lopsided but its wonkiness was hardly noticeable under a healthy arch of deep purple foliage and berries.

My Clematis ‘Roguchi’, on the other hand, never made a comeback. And, as far as I can tell from photographs, its replacement didn’t live past July. Since losing, two years ago, a C. tibetana that had bedazzled my arbor for a couple of Octobers with sprays of citrus peel flowers, it’s beginning to sink in that clematis might only come to my garden to die. I’m sure it’s nothing personal. I’ll chalk it up to acidic soil (they prefer it sweeter), close quarters (their roots want cooling shade but also some room to spread out), improper siting (wet feet through the winter is deadly) and neglect (I should have watered during drought). Lucky for me and my garden, the non-vining C. heracleifolia, which has lovely indigo-blue fairy cap flowers in September hasn’t proved nearly as picky or needy, spreading instead with a moderate amount of enthusiasm.

I’m glad for the reminder that my garden wanted more blue, a little earlier in the season, after the forget-me-nots and before the clematis. The only hiccup is the distinct memory, which I never even wrote down, of a visiting friend’s suggestion that there might be such a thing as “too many plants.” A criticism she knew I’d disregard with a guffaw. And you should too if anyone has dared call the plantiful-ness of your garden into question. Diversity is key to sustainability and amusement.

I plan to take advantage of the opportunities presented by death to fill some of those vacancies with blue-flowering perennials. I’d be tempted to try delphinium if I were up to the challenge. I’m not and it’s nothing personal. Just that I learned more about them this summer and made note that my garden bears little resemblance to Siberia. Turns out, contrary to popular belief, delphinium are extremely cold hardy; it’s our hot, humid summers and comparatively mild winters that do them in. On the other hand, the butterfly magnetic blue spikes of native North American hyssop cultivars such as Agastache ‘Blue Fortune’ and ‘Black Adder’ should be better suited to my garden’s climate and conditions.

The upside of a faulty memory is how easy it is to picture the changes I want to make. Because it seems for all the world like the garden was in full bloom just the other day.

How’s your memory of the past year in the garden? What were the high and low lights?