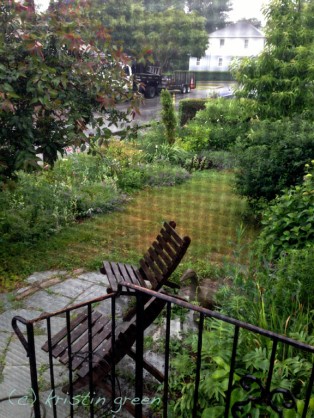 Yesterday, starting around 10 in the morning the sky opened over the longest running Fourth of July parade in the U.S. of A. It rained on miles of flag wavers, fire engines, Cub Scouts, Navy cadets, bagpipers, majorettes, trombone players, and drum corps. It poured on at least one politician running for governor, an ex-con running (again) for Providence mayor and all of the hands they shook and babies they kissed. It sogged picnics and postponed cookouts. It (temporarily) dampened everyone’s enthusiasm for illegal fireworks. And it soaked my dry-as-dust garden. Finally. This might sound unpatriotic coming from a resident of Bristol (admittedly, one of the few whose house is not draped in bunting) but after a long stretch of breezy, cloudless, and mostly crisp and perfect blue skies, for me it was the best day of summer so far. 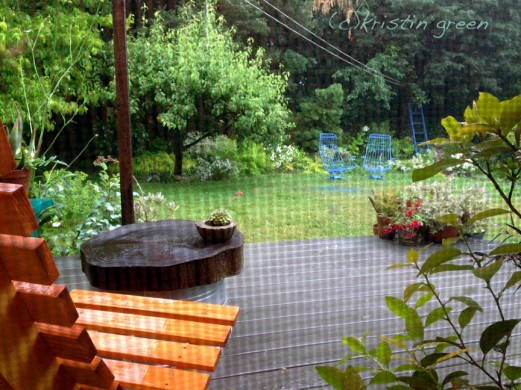 Near as I can figure — why aren’t weather websites more forthcoming with historical statistics? — almost 3” fell here. (There was a good 5” at least in my tubtrug this morning. For accuracy’s sake, I really should invest in a proper rain gauge…) Even though a lot of it fell too fast-and-furious not to just run off into the bay, for a few hours at least, while I took advantage of its steadiness to spend blissfully lazy hours reading fiction on the couch and listening to distant drums with a dog on my feet, it soaked the soil and I swear today I could actually watch my garden start growing again. And not just the crabgrass either.

Is your garden getting the weather it needs? Are you thoroughly enjoying your holiday weekend too?