I lived in blissful denial for most of the summer, thinking that our periodic rain showers, always overnight or when I needed to go back inside and clean the kitchen, were making a dent. They were not, though the amalgam of plants that constitute my lawn stayed green through August. We are nowhere near as stricken as poor California, but we need more rain than we have had. My garden tells me so.

The first to wilt were the plants I put in this past spring. I should have been watering them all along — and I did but only now and again — rain or not, to help their transplant-damaged roots recover and connect to the earth. Next to go limp were the enormous leaves of my rice paper plant (Tetrapanax paperifer), which have a large surface area to support. The even bigger butterbur (Petasites japonicus) leaves might have wilted too but those benefit from extra soaking from my rain barrels. It’s amazing how much collects off the roof even during the briefest of showers. By now, under the trees, where only the heaviest rain reaches the ground, even the weeds have wilted.

I am not inclined to provide supplemental water to my garden, and would never, ever, share such a precious resource with my lawn. I enjoy the break from mowing and would rather fill my garden with plants that thrive in this yo-yo climate of ours. That said, I learned my lesson last year when I lost one of my favorite evergreens to drought stress followed by a bitterly cold winter. This time around I have set the sprinkler on my youngest trees and shrubs to help prevent the bummer of losing something I spent great gobs of money on and/or watched grow from a cutting. As for the rest of my garden, I’m prepared to mourn the passing of anything that can’t tough out a dry spell, and replace it with something sturdier.

Generally speaking, Northeast natives are bound to be good bets. Even though I had to transplant my bayberry (Myrica pensylvanica) last spring, and haven’t been very kind to it water-wise, it hasn’t missed a beat. And although some of my ground covering bearberry (Arctostaphylos uva-ursi ‘Massachusetts’), planted in the leanest, meanest soil my garden has to offer, looked like goners after last winter, they too bounced back with new growth and are beginning to sport their fall colors. Sweetspire (Itea virginica ‘Henry’s Garnet’) would prefer moist soil but even it hasn’t (yet) shown any sign of unhappiness in my bone-dry garden.

Of course, sedum, sempervivum, and herbs like catmint, sage, and lavender are made for rainless summers but a lot of my other favorite perennials are looking as if they don’t mind the deprivation either. Right now Boltonia ‘Nally’s Lime Dots’ is a bubbly froth of petal-less green flowers on 5-foot stems. (They’d have grown even taller if I didn’t give stems the Chelsea chop back in late spring.) Burnet (Sanguisorba tenuifolia) looks great too even though the six-foot spikes have begun lean like drunks and their late-summer burgundy flowers are beginning to fade. The foliage of false indigo (Baptisia australis) is a lush blue-green, and the green-green thread leaves of eastern bluestar (Amsonia hubrichtii) are making promises to turn bright yellow right on schedule by the end of October.

According to the Farmer’s Almanac, we’re in for another long, cold winter. Big sigh. In the meantime, before the snow starts, my fingers are crossed for a decent amount of rain. As I write this, the forecast looks good but just in case hopes are dashed, I recommend that you soak your favorites now if you haven’t already. And start making wish lists to try again, if necessary, with tougher stuff come spring.

Since writing this, it has rained about two inches and we’re due for more tonight/tomorrow. Huzzah! Has your garden gotten the rain it needs? 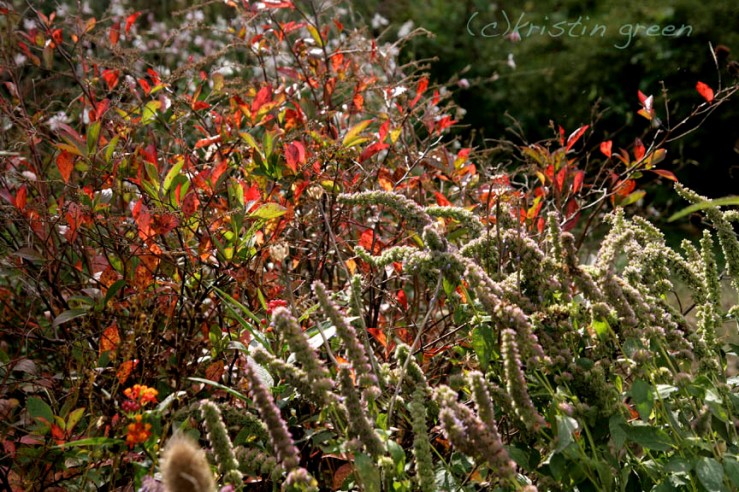 It breaks my heart to dismantle any part of the garden that’s still being used by pollinators and visited by birds but a few days ago I realized I had to cut some stuff down after all just to get a better view of other stuff I planted especially for fall color. And to tell the truth, even though there have still been a few monarchs bopping around, I’m relieved to see the Verbena bonariensis go, and the goldfinch will just have to make due with fewer black-eyed Susan (Rudbeckia spp.) seedheads to snack on because I had way too many.

Besides, they stole my focus from a pretty black chokeberry (Aronia melanocarpa). It only has a few bright-red eye-candy leaves left but plenty of shiny black berries dangling like temptation. The birds will eat them only after they’ve gobbled up everything tastier, which means I should get to enjoy them for a couple more months at least. It’s a pretty great native shrub (happy to grow a gangly 3-6’ tall in full sun to partial shade, and dry or boggy soil) and as far as I can tell from my walks around town in spring when its rose-y white flowers are out, and now when it’s bedecked in fruit, it’s an underused one. Don’t let the common name put you off. It’s only called chokeberry because they’re tart, not because they cause asphyxiation. As a matter of fact, they’re a healthy snack, high in anti-oxidants and supposedly super tasty baked in muffins or pie or processed, with plenty of sugar no doubt, into jam.

I might have to add moving my Virginia sweetspire (Itea virginica ‘Little Henry’) to my spring to-do list because I didn’t realize that, in my garden, it might actually stay the 2’ dwarf it’s meant to be. (Everything grows bigger and better at Blithewold. I try not to take it personally.) If Little Henry wasn’t crammed behind a still-blooming dahlia and the 3’ tall beebalm that I planted more for its winter-interesting seedheads than its summer flowers, I would be held in thrall by its translucent red autumn blaze backlit by a slanted sun right this minute. Come to think of it, I don’t remember having a very good view of its drooping flower sausages in early summer either. And it’s another terrific native shrub that should be at least as common in foundation plantings as that ubiquitous invasive thug, burning bush (Euonymus alatus), but isn’t. The cultivar ‘Henry’s Garnet’ grows a little taller and its fall color is just as dazzling as the gem it’s named for. Give either full sun to partial shade and moist soil if you have it, and transplant some of their tightly colonizing suckers whenever you have another fall-color hole to fill.

I already moved my Fothergilla gardenii ‘Blue Mist’ where I can see it color up from this very chair but I also planted a huge view-obliterating four o’clock (Mirabilis jalapa) right next to it for the hummingbirds. Although my fingers are crossed for one more hummer to stop through, I’m also secretly hoping that we get another frost soon that will spur me into digging the four o’clock up for winter storage and cause the fothergilla to begin its shift to yellow-orange-red from its summer color of foggy-blue-teal-green. I wonder why I don’t see more of this little shrub around too. It flowers best (little greenish-while bottle brushes before the leaves come out in spring) in full sun but doesn’t mind a little shade and average, everyday soil.

It’s hard enough for me to let go of the garden at the end of the season that I’ve decided just this minute to plant (next spring) a few more fall colorful shrubs at regular intervals throughout. I’ll need a Chinese indigo (Indigofera kirilowii), which turns bright orange yellow. And Hydrangea quercifolia ‘Little Honey’, which starts the summer in a yellow blaze and ends it purple-red. Because tidying and opening the views to plants like these might just help me keep the garden from looking like I let it go.