Most of this was originally published in EastBayRI newspapers September 14, 2016.

This was a tough summer. Too stupidly hot, humid, and rainless to maintain momentum after work. I avoided my own garden, only ducking outside periodically to water containers and catch night breezes from the deck. I wish I could say I spent my time in front of the fan wisely. I haven’t been blah-blahging and I didn’t place a bulb order. Lucky for me, it’s not too late.

It’s disconcerting to page through a bulb catalog in the middle of a hot summer. Spring is too delicate for such bruising weather. Crocus would be flattened; tulips would shatter. Daffodils and snowdrops strike me as a little tougher than most but I have no faith fritillaria would hold up. It’s hard to remember that the heat is temporary and spring, knock wood, is rarely so summer-like.

For the last dozen or so years in late July I have been able to suspend disbelief and work on bulb orders for my employers’ gardens but have never — not once — despite my best intentions, placed an order for my own garden. Last year though I got lucky in the bulb department. A friend who had just joined the team at John Scheepers (www.johnscheepers.com), offered to send me a box of bulbs at no charge. A grab bag assortment based on a loose wish list (something along the lines of, “I’d sing the blues, and it’s not easy being green”) arrived like Christmas one October day. My box included Tulip ‘Green Star’, green-cupped Narcissus ‘Sinopel’, and was full of “the blues” too. Chionodoxa, brodiaea, and Allium azureum. I was never happier to make room for those gifts or more grateful to see them bloom last spring. 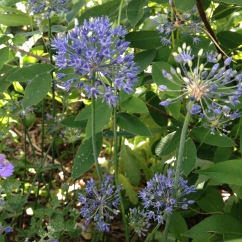 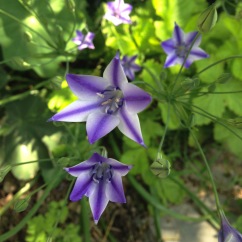 The memory of that gift reminds me, in a way much better than my work experience ever has, of the benefit in following through. Now that September is doling out stormy excuses for indoor activity and some of the sunny days are more crisply spring-like, I will endeavor to think spring and put an order together rather than procrastinate until local nurseries have sold out of the most interesting choices.

My wish list is still heavy on the blues and greens. I must have more chionodoxa. They naturalize beautifully but I want more, more, more, sooner. For the view from my window to look as if a dusky sky has fallen. I enjoyed the June-blooming knee-high amethyst blue spikes of Camassia quamash in another friend’s garden so much she shared them with me but I’m greedy for more of those too. Fingers crossed they’re as happy in my garden’s lean and mean soil as they are in my friend’s rich cake mix.

Until the neighborhood deer population discovers my garden I will add more viridiflora tulips to bolster dwindling supplies. (Hybrid tulips lose vigor after 2 or 3 years.) Not only is Tulip ‘Night Rider’ new this year (and thus extra covetable and possibly sold out by now) it boasts the best of both worlds: blue-ish (purple) petals with green flames. ‘Artist’ displays my other favorite color, orange — blue’s complement, go figure — behind green flames. A must have for a spectacular spring.

As I write this I’m stuck inside while a storm swirls around outside. The John Scheepers catalog is open on the desk next to me. One of my browser tabs is displaying a link to the array of tulip choices and there’s a credit card burning a hole in my wallet. All I need to do to get my order in is make a few clicks and hit send. Might just follow through this time but if I don’t, believe me, I’ll wish I had.

As I post this, I’m stuck inside because I’m still avoiding my garden. Its neglectful state overwhelms me. And I still haven’t placed a damn bulb order. Have you?

… those ticking time bombs of hope. (There really is. Here at least.) Originally published November 13 in East Bay/South Coast Life.

Now that we’ve had a killing frost, not to mention a super storm and slushy nor’easter, the garden is finally shutting itself down, and my days of feeling guilty for not accomplishing as much as I’d wish I had are coming to an end.

Whatever didn’t get divided and transplanted might just wait for spring now. But I’ll keep feeling guilty about not planting bulbs. And I’ll definitely kick myself come spring if I don’t plant a few because unlike transplanting the daisies, it really can’t be postponed until then. That said, the window of opportunity is still wide open. As long as the ground isn’t frozen solid and we’re still months away from March, there’s time.

I’m deeply conflicted about that because I don’t enjoy planting bulbs, which is strange considering how easy it is compared to transplanting a shrub or dividing a perennial. They’re such self-contained, efficient little things — just tiny ticking time bombs of hope. To light their fuse all they need is to be tucked into a deep slot of earth, down two to three times as deep as they are wide around the middle. Easy, right? Not if your soil is as stony as mine or if you’re trying to get them as close as possible to shrubs and perennials in an effort to avoid digging them back up again when you go to plant something else in June.

I usually get down on all fours with my Japanese digging knife (hori-hori). It’s sharp enough to slide between rocks and roots and only as wide as the average tulip bomb. I make a stab or two to loosen the soil a bit and while the hori-hori is still buried to the handle, I shove the bulb in, pointy side up, along the steel to the bottom, cave the soil back in as I pull the blade back out and move on to the next stab. I know a gardener who uses a pointed seed-planting tool — a dibble — for planting small bulbs. She punches holes, drops a bulb down and fills in after it with compost. That’s brilliant, even if hauling a tub of compost around the garden seems more effortful than appealing.

Part of me wants to plant small bulbs enough to follow through. Things like crocus, winter aconite (Eranthis hyemalis), Siberian squill (Scilla siberica), glory-of-the-snow (Chionodoxa forbesii) and grape hyacinth (Muscari armeniacum) don’t need to be planted very deeply. I also love that they carpet the ground floor of spring in the colors of sun and sky, and naturalize freely. Maybe a little too freely in the case of grape hyacinth, but that just means there’s no need to replant next year unless I decide I need them somewhere else, too (in which case I would probably opt to scatter their seeds or transplant patches of bulbils in spring). As much as I love seeing tulips in the garden and miss them when they disappear, they do diminish after a couple-three years and I have to wrestle with the will I/won’t I bulb-planting guilt all over again.

I shouldn’t generalize because not all tulips die out. Tulipa clusiana‘Lady Jane’ for one, whose bulbs really do look like little brown bombs at least until they go off in early May with narrow blue-green leaves and exquisitely delicate pink-flared petals, is a species variety. Species tulips should last longer in the garden and even increase, unless squirrels eat the bulbs. Cross your fingers that this year there are enough acorns to go around. Otherwise, try pinning chicken wire over your planting sites or spicing the soil up every so often with a dash of red-hot chili flakes.

This is good — thanks for listening. I have just about talked myself into planting a few time bombs before tucking myself in for winter hibernation. The only thing that could hold me back now is availability. I wasn’t on the ball back in July when the catalogs arrived, so I’ll hope that the local nurseries haven’t sold out of crocus yet. But if they have, I could always console myself with forcing amaryllis grenades inside instead.

(In the end I planted a couple dozen crocus and chionodoxa and some leftover throwaway tulips from work. No amaryllis at all.)