I thought about calling this post “The good, the bad and the ugly” because I have all of that to show-and-tell today but I’m just so excited about my – I should say Z’s – most recent discovery in the garden: Z spotted our first praying mantis and I honestly finally feel like I have arrived – that the garden here at chez champignon has arrived. I don’t intend any disrespect to all of the snakes I’ve seen over the two-plus years, the honeybees and bumbles, the hummingbird, or the most enormous earthworm I’ve ever-in-my-life disturbed (today) but to me, it’s the praying mantis that symbolizes all that’s meet and right and so sustainable in the garden. I take his/her presence to mean that I must be doing something (or a whole lot of nothing) right. 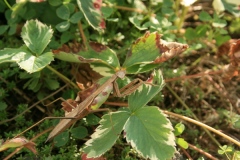 Now for the bad and not quite right: My mimosa (Albizia julibrissin) was, for a while, as Miracle Max puts it, “mostly dead”. But there was no “to blave” in this case (or even true love) and definitely no cure and after dropping all of its flowers and then every one of its leaves onto the frontyard garden over the past couple of months I can say that it’s well and truly dead as a doorknob and much much more unwieldy. Hopefully I’ll get to post soon on its removal.

As for the ugly, my crazyass grass (apologies for not properly identifying it – “crazyass grass” is what it goes by in this household) is finally blooming at a good 10′ tall and in as wrong a place as can be. I have determined that the only right place, at least for now, is in my co-worker’s garden and come spring I’ll dig it up and relocate it there. As soon as next spring/summer, the livingroom window bed will hold only a Harlequin glory bower (Clerodendrum trichotomum) and various and sundry other things that are nowhere near 10′ tall.

As soon as Z and I opened the gate into the backyard when we were first house hunting in November of 2006, I knew that we were home. But it’s the good, bad and ugly nearly 3 years later that confirms it. Nous sommes arrivés.

When did you feel like you – or your garden – had truly arrived?