When I spoke before about being underwhelmed by winter, I probably should have knocked wood. Not that I feel powerful enough to conjure a blizzard, and not that I minded. As storms go, this one (are we calling it Juno?) struck a sublime balance between excitement and compulsory coziness. I wasn’t the least bit inconvenienced by being forced to spend an entire day on the couch with a dog on my feet, and a cup of tea in my paw. And I’m grateful that the blizzard didn’t interfere with any important travel plans. Unless you count the window-rattling gusts that kept waking me from the tour I took of my garden — and everyone else’s — while I lounged on the couch.

A week or two ago, when I was still under the impression that winter would prove uneventful, I noticed my witch hazel (Hamamelis × intermedia ‘Jelena’) beginning to bloom and went out to stick my nose into its tiny twist-tie petals. I didn’t expect much. It was a cold day and the petals were still pretty tightly furled. Now that the shrub is half buried in a snow drift, they’re even less likely to release a scent. That’s okay. The promise alone gave me the focus I needed to start working on this year’s wish list.

For starters, I’d like to shoehorn at least one more witch hazel into my garden. Because what could be better than mid-winter flowers that bloom despite blizzards and, come a February thaw will throw a sweet scent across the garden? Never mind that they grow 10-feet tall (or more) with branches like outstretched arms, and there’s no more room at the inn. According to several catalog descriptions, my ‘Jelena’ is unscented. I beg to differ but even so, I’ll keep my eyes out for an H. mollis ‘Boskoop’, which has a reputation for being “intensely fragrant” and decorates itself in bright yellow flowers that thumb their noses at winter’s dull palette even more than Jelena’s orange ones do.

Speaking of fragrant, and speaking of plants in the witch hazel family (Hamamelidaceae) that bloom before the garden gets going, I almost forgot that winter hazel (Corylopsis glabrescens) has been on my must-have list for years. Ever since I first watched ruffled chains of pale greenish-yellow flowers emerge like handkerchiefs out of a magician’s sleeve from the buds of cultivar ‘Longwood Chimes’ in Blithewold’s Water Garden. I could sit under that shrub for hours just breathing in. (It’s a wonder I ever get any work done at all.)

Never mind, again, that my garden can’t accommodate a 10-15 foot tall shrub with a similar wingspan. Perhaps instead I’ll keep my eye out for the slightly smaller (6 by 8 foot) Corylopsis ‘Winterthur’, a cross between C. pauciflora, which is on the delicate side, and C. spicata, which is supposed to be awesome in every way. Both winter hazels will bloom towards the end of March. They, and the witch hazel, want a spot in partial shade with decent well-drained soil.

Such a wish list — and of course this is only the start — requires a list of another sort. Given that I can’t afford to buy an adjoining piece of property and there isn’t much lawn left to rip out, in order to make room for every new tenant I’ll have to start handing out eviction notices. But that was exactly my plan when I filled this garden with plants that spread with wanton abandon and/or self-sow madly. They have been placeholders. Easy come, easy go. She says. What I need is another day — doesn’t have to be a snow day if that would be inconvenient for any of you — to take a couch-bound tour of the garden again with my hands wrapped around a steaming teacup and a dog on my feet.

By now we’ve had no end of snow days (not that I was here for all of them — more on that later) but I still don’t have a clue how I’m going to shoehorn my wish list in. Do you have room for all of the plants on your list?

I don’t like to do the whole New Year’s resolution thing. Every time I’ve resolved to learn French or go back to yoga regularly I’ve failed to follow through. So I resolve to remain unresolved this year in order to avoid inevitable disappointment and self-loathing. But I do feel the need to mark the passage of time somehow. A look back at the accomplishments (and disappointments) of the past year on a lazy winter day seems like just what to do.

I spent so much time at my desk this past year and comparatively little time keeping the garden coifed that it rarely looked up to snuff photo-op-wise. But it had some moments. A few vignettes now and then that I kind of liked. And some plants that held their own in a sea of disarray, weeds, and seldom-mown lawn. 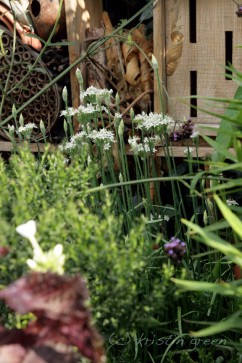 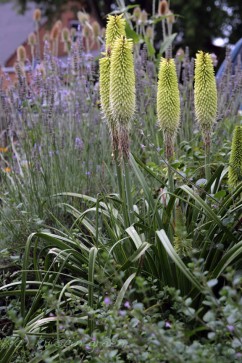 I have higher hopes for my garden this year. I should have plenty of time to devote to it again and I have a truckload or two of free patio slates to play with so at the very least there should be less lawn to mow eventually. But we’re also considering residing the house (which will have to be completed in stages as time and finances allow) and it looks like a sizable chunk of the front garden might get smashed, trampled and dug up to repair an underground water leak. So who knows. Maybe I’ll keep the backyard extra tidy and let my neighbors wonder what the heck is up in front.

What’s in the works for your garden this year? Do you think you’ll get to spend more time in it or less?

I’ve been wondering lately about the blog and my apparent abandonment of it. I like having it, at least in theory, as a sort of record of (a)musings about the garden. I just looked back at last year’s new years post and can say now with some certainty that my resolutions. as per usual, came to a fair amount of naught. But I like being able to look back on my intentions. It’s good to remember that I had intentions.

I have intentions this year too. Some of them are the very same. I still haven’t painted the shed. And I will. Probably. Sometime. I should. (I shed, even.) But I feel a shift this year to the front of the house. I don’t like what I see in front. Part of that is, when I walk or drive up to it, I see the house itself and it’s a “mid-century” ranch (I love that that’s the description given in the NY Times for ugly things built in the 50’s-60’s. “Mid-century” makes it seem so vintage-cool.), sheathed in white vinyl with red plastic shutters. So some of what’s got to change is a little beyond my ken. But we discovered a leak in the ol’ roof and since Z will have to take a week off in spring to re-roof, he agreed to also think about re-siding, starting with the front, around the same time. And I will think about paint colors if weathered shingles, à la Nantucket, are beyond our means. I’m leaning towards dark black-ish, but can anyone steer me in a more colorful direction?

As far as the front-yard garden goes, I intend to open it back up after having closed it with ginormous plants (remember the crazy-ass grass?). The Mimosa tree (which is, in fact, dead) will come down (hopefully soon) and I’ll make more garden in front that might include a sort of open area somewhere around the (tree) stump. I’m letting go of my front-porch desire. We just can’t do that yet. And I’m thinking of jumping on the veg bandwagon after all. The more I think about food, the more I want to grow it myself and if I do that – order seeds and everything (beets!) – the food will have to live cheek-by-jowl with the ornamentals, front and back.

As far as the blog goes, I’d like to keep doing it too. Part of my hang up is pictures. I love the pictures I take at work. I don’t always love the ones I take away from work and so I don’t post them. And then don’t post anything. Will it it be possible to have a garden blog without any pictures? Should I even attempt such a creature? I’m not sure yet. But it’s another whole year, I have a gin martini in my paw, and anything goes right now, so we’ll see. (And meanwhile we had snow, so I have some pictures.)

Are you giving everything an annual new year’s re-think too? Happy Happy, by the way! And thanks for keeping this little link on check list…